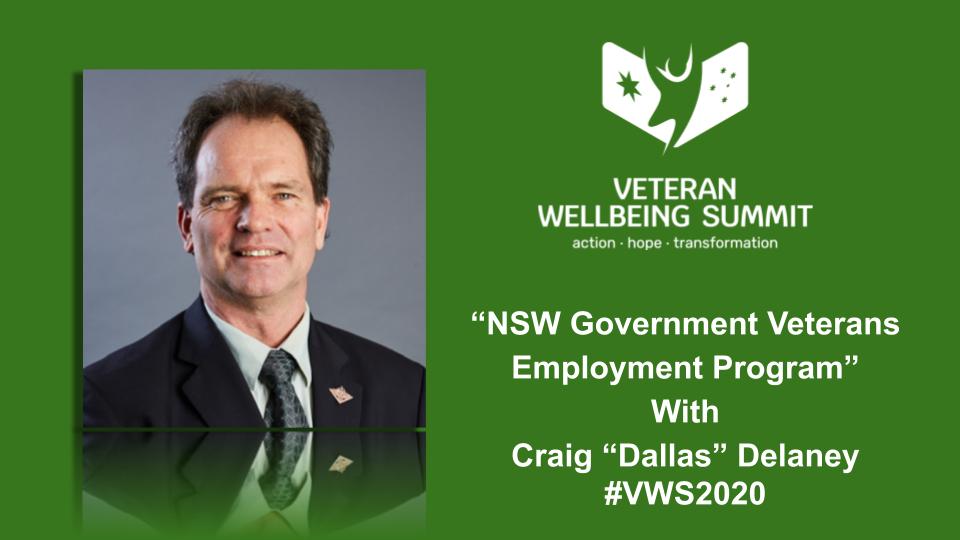 Join the team from the NSW  Veterans Employment Program for this interactive presentation. See what tools are available on our website as well as  how to  use your training and experience to apply for NSW Government roles against the NSW Government Capability Framework

Dallas left the Australian Defence Force in January 2018 after three decades of service. He is now employed as the Veterans Employment Program Manager for New South Wales Government. Lieutenant Colonel Delaney graduated from the Royal Military College, Duntroon to the Royal Australian Corps of Transport in December 1988.

Throughout his military career he enjoyed a number of training, regimental, and operational postings and deployments. These have included support to the Sydney 2000 Olympic Games and time in East Timor, Solomon Islands, Iraq, North and South Sudan. After the terrorist events of September 11, 2001 he was posted to United States Central Command in Tampa, Florida as the Australian Defence Force liaison officer for the Global War on Terrorism. In 2011 he was awarded a ‘Gold Commendation’ by the Chief of Joint Operations for his leadership as the Commander Australian Contingent 13 to Sudan and resolving the logistic challenges faced by the United Nations Mission in Sudan and moving the Mission from North to South Sudan (7,000 personnel and 30, 000 tons of cargo!).

His most enjoyable posting was working at the Embassy in Washington D.C. for three years, where he was a liaison officer at the White House and the Pentagon. His strangest posting was being posted to the Navy for two years as the Officer Commanding the Ship’s Army Department on HMAS MANOORA.

Having worked all over Australia and in 20 different countries he called himself a nomad prior to returning to Sydney in 2009. He is married to Linda, and they have two children.