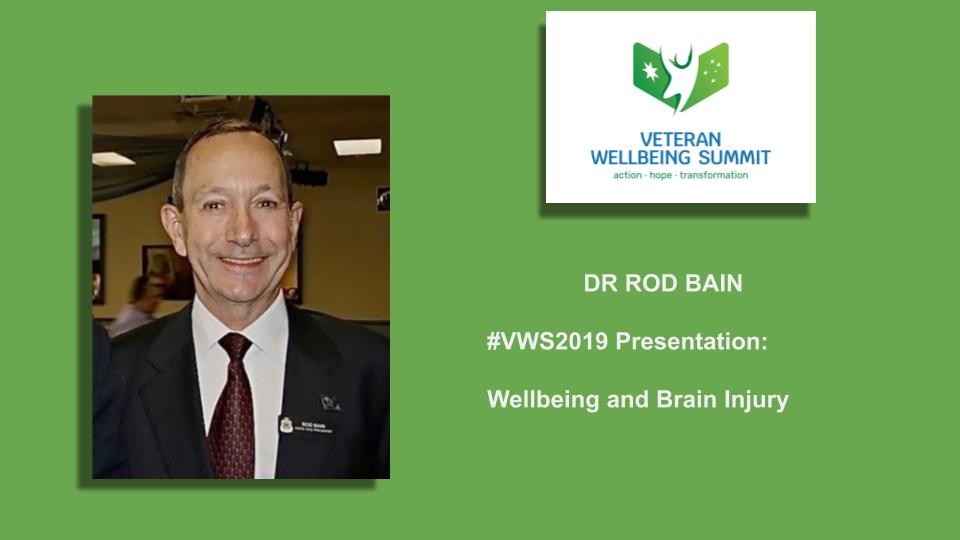 In this #VWS2019 podcast presentation, Dr. Rod Bain speaks about wellbeing and brain injury and the importance of correct diagnosis, for treatment and management.

Dr. Bain served in the Royal Australian Navy from 1966 to 1973 joining while still a student. The major portion of his post-graduate time was spent in seagoing appointments. In 1969 he also served ashore with the RAAMC. at 1st Aust Field Hospital in Vung Tau, SVN. In 1970 he served with the USN 7th Fleet on HMAS Hobart and in 1972 he became the Principal Medical Officer on HMAS Sydney returning our troops from Vietnam.

Discharge from the RAN was followed by a number of years of medical specialty training at several of the leading teaching hospitals in Sydney and London. Commenced setting up the Department of Anaesthesia at Westmead Hospital on returning to Sydney in 1977, but chose finally to begin full-time Private Practice on the NSW Central Coast and not stay with an academic career. The work involved the Gosford Public Hospital and two Private Hospitals. Retired from full-time medical practice at the end of 1999 but continues to remain registered to practice in Australia

In 2000 he developed his own private companies dealing in Art and Land sales. These are now all sold and he concentrates on full time medical advisory work relating to ADF members and ex-service personnel and their families along with Department of Veterans’ Affairs committees

Rod joined the Gosford RSL sub-branch in 1997 while reducing his full-time specialist career at the local hospitals. He became a RSL sub-branch pensions/welfare officer in 1998, positions he relinquished on transferring to the City of Wollongong Sub-branch when Central Coast District Council became a Metropolitan one in 2012. In early 2014 Rod transferred into North Bondi RSL Sub-Branch.

Dr. Bain with his professional background has several State (RSL) and National (RSL) appointments and is a past (2006) Board Member of several Aged Care facilities on the Central Coast. In addition, the Department of Veterans’ Affairs has appointed him to a number of its National Committees. Some of these include:

Rod also belongs to the Vietnam Vet. Assoc. of Aust., the Naval Association of Aust., the former Boer War Memorial Committee and the RAAMC having served at 1st Aust. Field Hosp. in Vietnam.

He is the Medical Advisor to the Aust. Veterans and Defence Services Council (AVADSC) as well as the National Naval Assoc. of which he is also a member.