The Healing with Nick Barkla 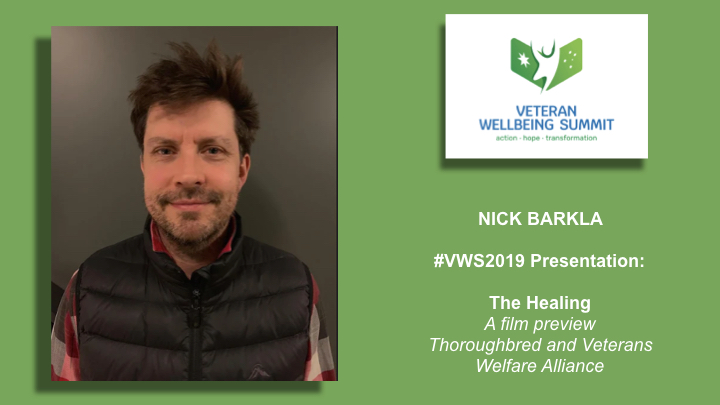 Watch the preview of The Healing

Nick Barkla is an award-winning Australian Actor, Producer and Director with over 15 years experience in the film, TV and theatre industry. He recently Directed and Produced the short documentary ‘The Horses’ that has been officially selected in St Kilda Film Festival and Lorne Film Festival 2019 as one of the best short films in Australia.

Nick is well aware of the impact war can have on families and individuals. His Grandfather, Sergeant L.W. “Bill” Barkla, served with both the RAAF and the RAF Bomber Squadron in the Middle East in World War II. Despite 4 plane accidents, he survived the war, but was badly burned before leaving the Middle East, when his plane’s tyre blew out and he made a ‘crash landing’ at 140 km/hr. Not so lucky was his younger brother John, who was killed while serving in the Navy. Bill’s father, Leonard, also lost his life in World War I as a member of the AIF.

“When I heard about Scott Brodie’s Thoroughbred and Veterans Welfare Alliance (TVWA), and his ground-breaking work transforming the lives of vulnerable military veterans and ex-racehorses, I was immediately intrigued. How does working with thoroughbred ex-racehorses help people deal with anxiety, depression and post-traumatic stress disorder? And how does the interaction circle back to the horses, many of who face uncertain futures if they can’t be re-trained for second careers?
Over the past three years I’ve had the privilege of documenting Scott’s work with several military veterans and ex-racehorses as he teaches them new skills that build trust, patience and confidence. Skills that have enabled them to rebuild their lives, return to work and repair damaged relationships with family and friends. It’s been an honour to witness horses and humans face their fears, overcome immense obstacles, and thrive. I can’t wait to share the resulting film with the world!”
– Director’s Statement, Nick